A Cochlear Implant is a small sophisticated electro-medical Hearing Device. It helps people with Severe to Profound Sensorineural Hearing loss to hear sounds. This device is generally recommended if conventional Hearing aids do not benefit.

What Is The Advantage Of A Cochlear Implant?

Why Does One Need A Cochlear Implant And Not A Hearing Aid?

This is a basic question asked by most people when advised a Cochlear Implant. Hearing aids do not help some people suffering from Severe or Profound hearing loss. For them, the speech is not clear with Hearing aids. The sound amplified by the Hearing aid does not help as the Cochlea is not functioning normally. These people may find cochlear implants as the means to hear sounds. Read this article on Cochlear Implants vs Hearing Aids to understand the differences.

Let us understand the functioning of the Cochlea. This will help us to understand how a Cochlear Implant works.

How Does The Human Cochlea Function?

The Auditory Nerves carry the electrical pulses from the Cochlea to the brain. Partial or full damage to the Cochlea reduces the sound signals reaching the brain. This results in Hearing loss or reduced hearing ability.

How Does A Cochlear Implant Work?

Parts Of The Cochlear Implant

The Cochlear implant consists of two parts. The external visible part and the internal part.

External Parts Of The CI

The Speech Processor is an external part. It sits behind the ear in a casing which looks the same as a BTE Hearing Aid. This contains the microphone and the sound processing circuit. The wires and the Transmitter are also the external parts.

Functions Of The External Parts Of The CI

The primary function of the Microphone is to pick up the sound. Same as the microphone in a conventional Hearing aid. These sound signals are then passed on to the Speech Processor.

The Speech Processor is generally situated in the same housing as the microphone. The housing is slightly bigger in size to a BTE hearing aid. With regular research in this area, the housing may become as small or much smaller. In some models, the processor is in the shape of a small box and kept in the shirt chest pocket.

Internal Parts Of The CI

The other parts of the Cochlear Implant are internal and placed under the skin. This process requires a surgery or implantation by an ENT Doctor.

The main parts are

Functions Of The Internal Parts Of The Cochlear Implant

The two internal parts are surgically transplanted under the skin. These are the Receiver and the Electrodes.

The transplanted receiver is under the skin behind the ear. This receiver has a coil which picks up the signals given out by the transmitter.

The speech and sound signals picked up externally reach the Cochlea. Hence the name Cochlear Implant.

Precaution Is Better Than Cure

With early detection, we can stop the progress of Hearing Loss. Consult your Doctor immediately to prevent further damage. Please note that the Cochlear Implant does not cure the hearing of the affected person. To some extent, it restores the ability to hear the sensation of sound. 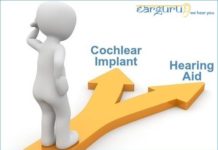