EarGuru, the ear health blog has compiled a list of the most frequently asked questions or FAQs on Cochlear Implants. We will keep updating the FAQs with new information.

What Is a Cochlear Implant?

A cochlear implant is a small, advanced biomedical electronic hearing device that helps people to hear by delivering sound signals to the cochlea in the inner ear.

All the parts of the cochlear implant are not worn outside like a hearing aid. The receiver and the electrode array are implanted below the skin, while the processor and the transmitter are above the skin and are visible.

What Does a Cochlear Implant Do?

What Are the Parts of a Cochlear Implant?

The parts of a cochlear implant can be broadly divided into the externally visible parts and the internal implanted parts.

The external parts of the cochlear implant are:

Generally, the microphone and the processor are enclosed in the same housing that fits behind the ear.

• Transmitter/Transmitter Coil – The transmitter coil radiates the signals which are picked up by the receiver coil inserted under the skin.

The internal parts of the cochlear implant are:

• Electrode Array – The cochlear implant electrode array receives the electrical signals from the receiver. The signals are distributed to the electrodes that are placed in the cochlea as per the frequencies.

How Does a Cochlear Implant Work?

The primary function of the cochlear implant is to deliver the speech signal to the cochlea. Once the signals reach the cochlea, the auditory nerve carries them to the brain, these signals are interpreted by the brain as speech/sound.

The cochlear implant works as follows:

• The speech is picked up by the microphone and the signal is sent to the speech processor.
• The speech is divided into different frequency bands and converted to a digital signal by the speech processor.
• The digitized signal is sent to the transmitting coil.
• The transmitting coil radiates/transmits the signal.
• This signal is picked up by the receiver coil implanted under the skin.
• The receiver coil also contains a circuit to distribute the speech signal to the various electrodes as per the frequency.
• Each electrode carries a separate frequency signal and is placed in the spiral cochlea.
• The cochlea is a hollow spiral with hair cells on its inner surface. The stimulation of the hair cells along the spiral cochlea depends on the frequency of the sound.
• The signal from the processor sends signals to the electrodes which stimulate the cochlea.
• This stimulation is picked up by the auditory nerve and sent to the brain.
• The brain interprets the signals as speech.

For more details read How Do Cochlear Implants Work?

How Does a Cochlear Implant Help a Person Hear Better?

A person is unable to hear well as the damaged hair cells cannot produce the stimulus that is required by the brain, the cochlear implant helps the person to hear better by imitating the functioning of the hair cells.

Who Is a Candidate for A Cochlear Implant?

The following criteria decide the candidacy for a cochlear implant:

• Should have severe to profound sensorineural hearing loss.
• Poor speech recognition even with a hearing aid
• The patient’s age at the time of the cochlear implant surgery.
• Whether the patient is deaf from birth or has become deaf later in life. If later, at what age has the patient become deaf?
• Should have a reliable support system i.e family, friends and deaf friendly schools in case of children.
• Should be prepared for continuous post-operative therapy on regular basis.
• No existing medical conditions that can affect the surgical implantation.

What Are the Types of Cochlear Implants?

A popular type of cochlear implant consists of a behind the ear hearing aid shaped housing, though a little larger. The microphone and the processor fit into this housing. A cable leads from the housing to the transmitter coil attached to the scalp with the help of a magnet.

A little outdated type of cochlear implant is in the shape of a small box. The microphone and the speech processor are contained in a small box that is clipped/attached to the pocket or the belt. A long wire leads to the transmitter on the scalp.

Trials of a invisible cochlear implant are going on and the results are promising.

There are other types of implantable devices.

What Is Cochlear Implant Surgery?

Below is a brief description of cochlear implant surgery:

• Cochlear Implant surgery takes place under general anesthesia. The total procedure takes about 2 to 3 hours.
• The operating team refers to the MRI or a CT scan and other reports before the surgery.
• The surgeon makes an incision or a cut behind the ear to insert the internal part of the cochlear implant. The cut is dressed and bandaged after the operation.
• The patient is shifted to the recovery room and is under observation until the anesthesia wears off.
• The patient is discharged in a few hours if there are no complications and he/she is feeling fine.
• Instructions are given to the patient for post-operative care and prescribed antibiotics to prevent infection.

How Long Do Cochlear Implants Last?

Ideally, the cochlear implant should last a lifetime.

Manufacturers upgrade the electronics and launch new models. In most cases, the external speech processor is compatible with the implanted parts. Though cochlear implant failure is not unheard of, the chances are very less.

What Are the Cochlear Implant Pros and Cons?

The cochlear implant pros are as below:

• Cochlear implant users can hear sounds that were not possible with a hearing aid. The sound of a door bell or a telephone bell is clearly heard. The person can also hear the footsteps of people walking and the door shutting.
• CI users can understand speech better. There is less dependence on lip reading.
• CI users feel relaxed as there is no stress associated with the effort to lip-read and miss out on conversations.
• The Cochlear implant user can easily talk on the phone.
• CI users can watch television.
• CI is a boon for children as they can hear and follow the teacher at school.

The cochlear implant cons are as below:

The disadvantages or associated risks are far less than the advantages of having one’s hearing restored.

• There has been a very small percentage of cases where the cochlear implant has not functioned. Additional surgery corrects this situation.
• It can cause infection. But the chances are very remote.
• The sound received through the cochlear implant is not as natural as normal speech. Cochlear implant users who could hear earlier and have lost their hearing later, have described it as “robotic” or “mechanical”.
However, most patients get used to the sound and do not find much difference once the brain recognizes the new sound.
• No upgrades for the internal part of the cochlear implant. The Companies manufacturing cochlear implants generally upgrade the external sound processors. The new sound processors are compatible and include the latest developments in technology.
• The Cochlear Implant is more expensive than a hearing aid, and extra care is needed to avoid damage.
• It is expensive to maintain as batteries and connecting cords are expensive.
• A person using a cochlear implant cannot go back to using hearing aids. 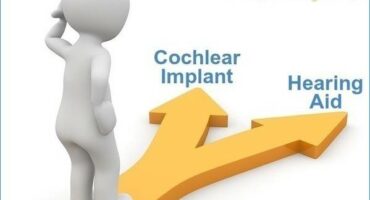 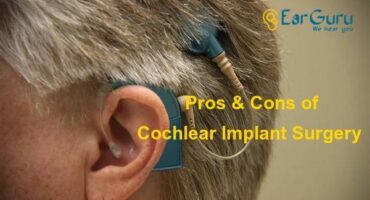